Dubai is famous for being the mecca of luxury real estate in the Middle East. It was the first market to sell a new development property in Bitcoin.

The Aston Plaza and Residences in Dubai Science Park is the development that made headlines for accepting payment in Bitcoin. The project isn’t even completed yet. Lord knows what one Bitcoin will be worth in the summer of 2019 when buyers get to move in. The world’s biggest cryptocurrency is already down 45% this year alone.

The 50 units that were priced in Bitcoin are nearly all sold out.

Star Business Centre, a part of the Dubai-based Samana Group, has started accepting digital currency as rental payments for their offices downtown.

Dubai launched its first cryptocurrency in October called emCash, making the United Arab Emirates the first country to officially sanction a cryptocurrency. Samana Group will use that coin, along with Bitcoin, as a form of payment.

These are big, profile properties in a showy and glam global city. But the Bitcoin market for housing there is not expanding. And the market is not all that interested in seeing it expand.

Many brokers have stopped accepting digital currencies after the UAE’s central bank issued a warning on them in October. Bank president Mubarak Rashed Khamis Al Mansoori said bitcoin is used for money laundering and terrorist finance.

Sameer Lakhani, Managing Director at Global Capital Partners, said in a Gulf News article published Thursday morning in Dubai that “The UAE Central Bank has joined others in warning about the speculative nature of Bitcoin. Since then, clearly there have been increasing calls to regulate it and it is increasingly likely that this will happen.”

Despite a handful of companies advertising their wares in crypto, a recent industry survey shows 97% of Dubai real estate investors would not buy, sell, or rent a property in crypto. That’s near unanimity.

The survey was conducted this week by Dubai real estate portal Bayut.com. 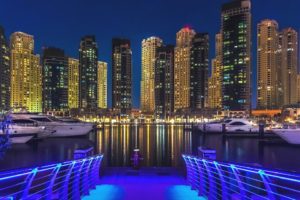 A slight majority, 52%, said they are not interested in knowing the Bitcoin price on a piece of real estate. Some 79% of Bayut’s survey respondents said investing in crypto as a stand-alone security was a poor investment, though the results may be slightly skewed as only around 20% of the survey respondents considered themselves real estate investors. Half of the respondents were renters, making it unclear as to whether they considered themselves part of any investor class.

For media or event bookings related to Brazil, Russia, India or China, follow on Twitter at @BRICBreaker