The dancing house in Prague is an image of a couple in dance, expressed in urban architecture. The house actually consists of two towers, which are called “Ginger and Fred”, referring to the famous Hollywood couple of dancers and actors Ginger Rodgers and Fred Astaire.

The comparison is really reasonable: one tower is straight, has the shape of a cylinder, expanding upwards, and symbolizes a man. And the second tower is made of glass, depicts the figure of a woman with a narrow waist, in dance she seemed to lean against her partner. The less flattering nickname of the building is Drunk House.

The building is made in the style of deconstructionism. It is recognized as the original and unusual landmark of Prague, which the guests of the city strive to visit. Architects of the Dancing House in Prague are Croatian Vlado Milunich and Canadian Frank Gehry. 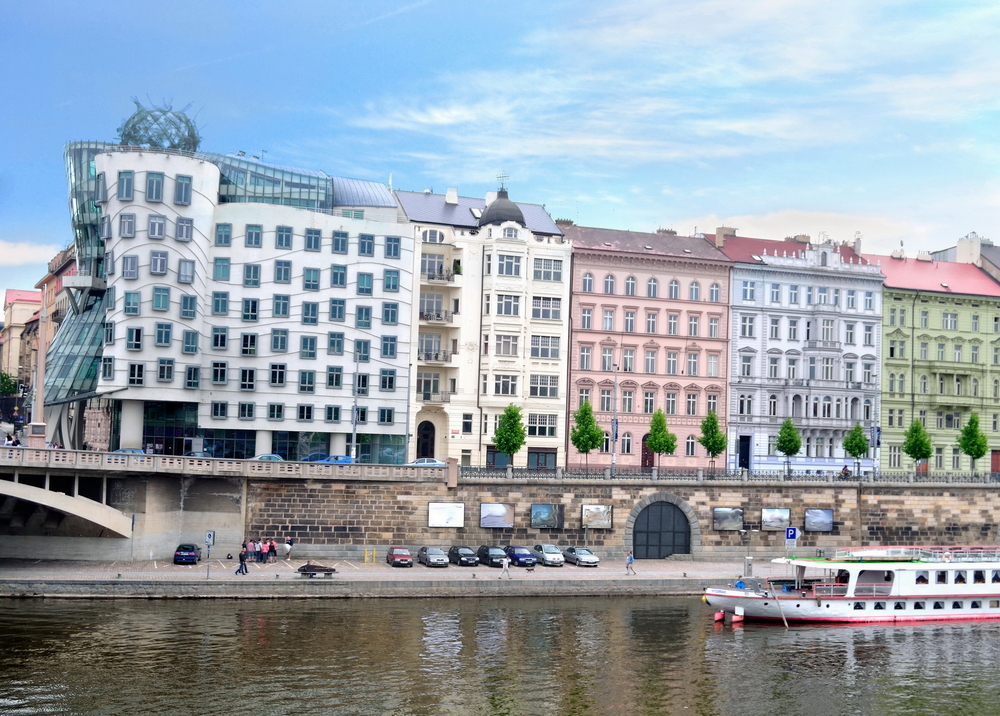 Construction History of the Dancing House

Earlier, a building of the end of the 19th century, destroyed during the American bombardment of the city in 1945, stood on the site of the Dancing House. Not far from the remaining ruins there lived the first president of the Czech Republic, who proposed to build a new house.

Construction work was carried out from 1994 to 1996. Two cylindrical towers, tightly adjacent to each other, surprise with their unusualness and dissimilarity to other buildings, and at the same time attract and include the imagination of everyone looking at them. Due to the optical illusion it seems that the house is ready to move, but in fact it is made according to advanced technologies that ensure the strength of the structure.

Over time, the Dancing House managed to become part of the history of the magical city of Prague, fascinate the inhabitants, and attract tourists. Now the building provides office space, a gallery of modern art, and a hotel are located here. One of the most visited places is the roof of the house where the restaurant is located overlooking Prague.

Restaurant in the Dancing House in Prague and an observation deck

On the top floor of the building is the restaurant “Ginger & Fred”, through which you can go to the roof for free. The terrace and part-time viewing platform of the restaurant pleases with outstanding and unobstructed views of Prague.

The embankment and its roadway, the closest architectural ensemble, the whole Jirasków Bridge over the Vltava and part of the Smichov district on the opposite bank open to the gaze, even the Prague Castle is easily recognizable in the distance. To see even more, to look into the details, you can use large binoculars.

Previous PostWhere to Buy an Apartment by the Sea and Save?Next PostRenting out the Real Estate in Austria