The Greek government has been taking measures to reduce the country’s national debt and budget deficit. Positive results can already be seen: the International Monetary Fund experts expect the country’s GDP to grow by 1.8% in 2017 and by about 2.6% in 2018. It is an ideal time to invest in Greek property – along with the country’s gradually recovering economy, its property market, which has hit rock bottom, is poised for growth.

In this context, the retail property segment is coming to life, with new players entering Greece’s retail market. To minimise risks, investors are buying high-quality property in Athens in prime locations.

The city’s main shopping belt is Ermou Street in the neighbourhood of Monastiraki. Outlets of mid-priced international brand outlets are located along this street. Other locations popular with retailers are Panepistimiou Street, Patission Street, Stadiou Street and the fashionable Kolonaki neighbourhood, which has many stylish boutiques and restaurants.

In the northern suburbs of Athens, shops and restaurants are mostly concentrated in Kifissia, Marousi, Nea Ionia, Neo Psychiko, Nea Erythraia and Chalandri. In the west, outlets of popular brands targeting buyers with relatively low incomes are concentrated in Peristeri and Aigaleo. Piraeus, located southwest of Athens, has a thriving retail property market with a catchment area of about 500,000 people. Shops are concentrated along the three main streets: Iroon Politechniou, Vasileos Georgiou and Sotiros. The main retail areas to the south of Athens are located in the suburbs of Glyfada, Kallithea and Nea Smyrni.

According to a survey by the Hellenic Confederation of Commerce and Entrepreneurship (ESEE), 69% of Greek retailers rent their outlets and only 31% own them.

The high occupancy rate of retail facilities in Athens is due to the restricted supply. New properties are rarely built as construction permits take long to be issued and banks are unwilling to finance development projects. According to NAI Hellas, Greece has the lowest Gross Leasable Area (GLA) in Europe, at 55 m² per 1,000 people. In most cases, shopping mall owners expand the existing space to satisfy the demands of major retailers. By 2020, Greece will have another 200,000 m² of retail space, not least because of the redevelopment of 14 regional airports privatised by Fraport.

Generally, the Greek retail sector continues to attract a significant share of investments: about €38 million in Q4 2017, with transactions involving retail property accounting for 35%. According to NAI Hellas, Grivalia Reic was the most active buyer in Q4 2017, acquiring two supermarkets in Athens, a shop in Piraeus and two boutiques in Nea Erythraia. The biggest transactions in 2017 were the purchase of four Sklavenitis supermarkets by Pangaea Reic for €47 million and the acquisition of 31.7% of Lamda Malls by Värde Partners for €61.3 million.

Cushman & Wakefield expects prime segment rental rates to remain stable but to decline in peripheral locations due to the tenant outflow to the centre. 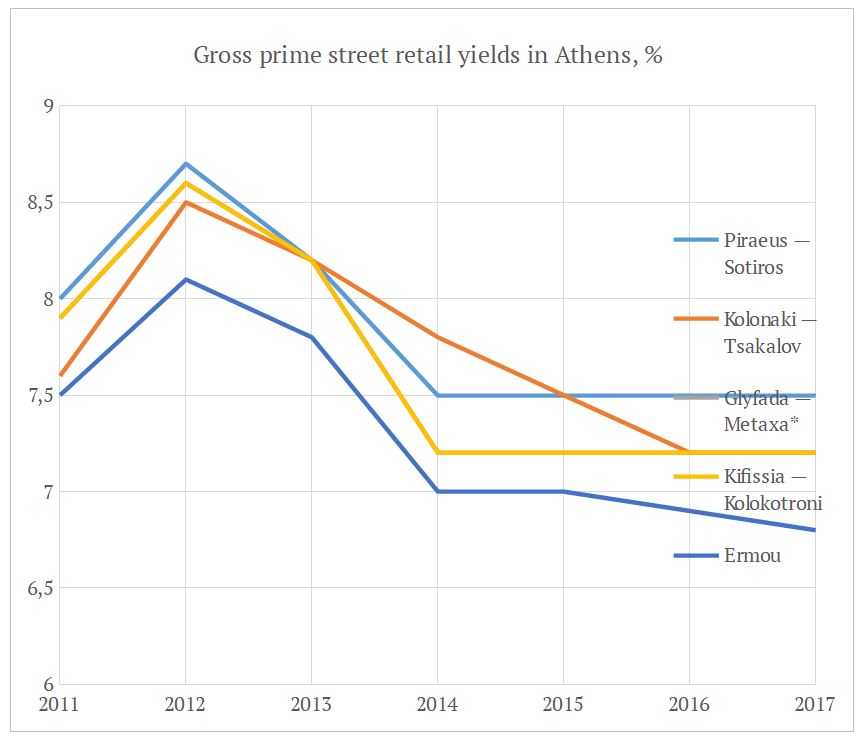 Most analysts are optimistic about the Athens retail property market. Greece’s economic recovery and the growing number of tourists are having a positive effect – private consumption, shop revenues and investor incomes will continue increasing.

However, Greece’s retail property market, like its office space and warehousing property markets, strongly depends on the state of the national economy, which has only started its post-crisis recovery. For investors who are not ready to take major risks, Tranio recommends investing in hotel property directly related to the tourism. This sector is now experiencing a boom. According to preliminary estimates by the Greek National Tourism Organization, the number of international visitors to Greece reached a record 30 million in 2017.

Tranio.com is an international real estate platform with a network of 700 partners worldwide and a catalogue of more than 90,000 listings in 53 countries. The company publishes daily news, high quality analysis on foreign realty, expert advice, and notes on laws and procedures related to buying and leasing properties abroad so that readers can make their property decisions with confidence.